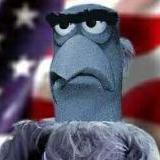 I think Rick Villareal has a big year.

The comical thing is that some of you are so delusional, that you truly believe you know what in the hell you're talking about

I posted that back in March.  Those that gave that prediction a -1 might want to reconsider.