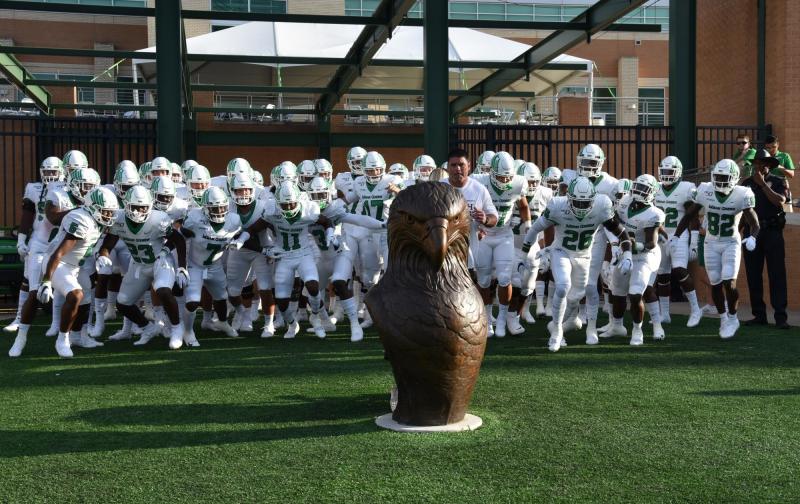 Fine's high-school teammate Jason Pirtle caught three touchdowns, the first three scores of his college career; Rico Bussey, Jr., had a career-high 156 receiving yards and a score; and Deion Hair-Griffin had a 58-yard kickoff return to set up the game's first score and a 96-yard return for a touchdown in the Mean Green's 51-31 season-opening victory over Abilene Christian at Apogee Stadium.

"I like our athleticism and I'm excited about this team, but we've got to more focused for four quarters," he added.

The Mean Green offense, facing high expectations with a record-setting senior quarterback surrounded by an arsenal of weapons, scored 16 seconds into the 2019 season and roared to a 17-0 lead in the first period. It was 31-0 before ACU got on the scoreboard.

"We were able to create some different matchups with play-action," Littrell said. "We did a great job getting the offense rolling early. I loved the way we started fast.

Fine threw a pair of touchdown passes to an extremely open Pirtle in the first quarter and added a 49-yard, second-quarter touchdown to Bussey, who made the grab falling backwards into the end zone between two ACU defenders. Fine's final TD toss of the night went to Pirtle for a 31-0 lead.

The Mean Green ground game struggled early but picked up speed in the second half, led by DeAndre Torrey with 95 yards and Loren Easly with 51 yards and a touchdown.