A little birdie told me

Basically, they represent all that is soulless and wrong. 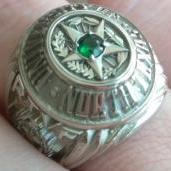 As an RTVF major, I can say, "This guy's a straight shooter with RTVF upper management written all over him."