If SL can get claim a CUSA title, I pretty much wouldn't give a damn about the bowl situation/result. Would LOVE LOVE for this team to win both.

Bowl eligible. Obviously its happening, love it or hate it I ain't crazy about it, but I'm here for it. Lets just get that conf championship 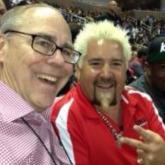 Opinions and biases completely out of the equation.... if we play in the conference championship game (and it would take an epic collapse not to), he's getting extended. Let's get onboard and enjoy th